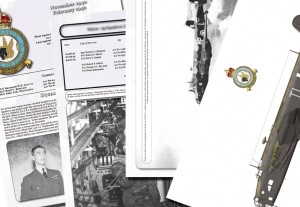 From before the end of the Great War the United Kingdom had coveted long-range bombers that were able to bomb the continent. Bomber Command, formed in 1936, was a major and vital organisation within the RAF. While the twin-engine Vickers Wellington was about to be introduced, a new generation of four-engine bombers was already under development. The concept was not new but, in the middle of the 1930s, technological progress with engines and airframe materials gave the opportunity for many air forces to develop their long-range bombers. It was also a matter of prestige as the long-range bomber, also known as the ‘strategic’ bomber, was not accessible to all. In the middle of the ‘30s, the USA and Germany had various projects under way and even Italy joined in. When the war broke out, the UK had two projects of ‘strategic’ bombers on the table – the Short Stirling and the Handley Page Halifax. Built in small numbers, less than 100 (of the global production of over 6000 copies), the Halifax Mk.I despite its shortcomings, was the first but the essential step to allow the Halifax to reach maturity, goal achived in 1943 only. This study is rich of photographs, appendices, document and two colour profiles. 35 pages.