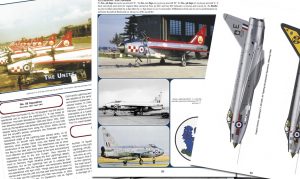 The English Electric Lightning was Britain’s supersonic interceptor of the Cold War era and the only all-British Mach 2 fighter aircraft. It was designed, developed, and manufactured by English Electric, which was subsequently absorbed by the newly-formed British Aircraft Corporation.
The Lightning F.1 was the first mark of this RAF iconic fighter of the sixties to enter service. Mainly a pictorial study with over 120 photographs (for less than 50 aircraft built), this book gives a good overview of the camouflage and markings worn by this mark until being withdrawn from use in the early seventies after about a decade of service.