After the December 1941 attack on Pearl Harbour the Pacific based squadrons of RNZAF began to receive modern US warplanes. Under the command of Squadron Leader T.J. McLean de Lange, No.25 Squadron was created on 31 July 1943, as the RNZAF’s sole SBD Dauntless dive bomber squadron. In March 1944, No.25 began operations on Guadalcanal; objective Rabaul. In eight weeks 530 sorties were flown for the loss of only five aircraft. However, due to the outdated nature of the Dauntless, the Squadron was disbanded at the end of May and surviving pilots transferred to RNZAF Corsair squadrons.

Unlike most RNZAF squadrons, each Dauntless was allocated to an individual crew, so most sported large personal markings of which most have been represented in this short book. No.5 in the Allied Wings series is 36 pages long and richly illustrated of 30 photos plus 12 colour profiles. 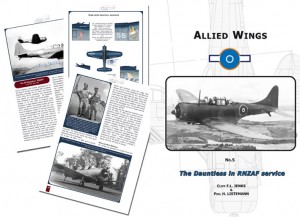 A PDF version e-pub and Kindle versions are also available.