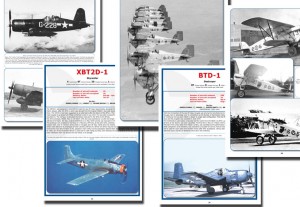 A pictorial study of the USN aircraft between 1922 and 1962. Over forty years, between 1922 and 1962, the USN and USMC used a designation system which began with biplanes and ended with jets, having been used through two major wars, WW2 and the Korean War. This system remained largely the same during that time, though it evolved with the introduction of new types and technology, and new exceptions developed as well. The purpose of this series is to explain this system using photographs. This fourth volume contains over 100 photographs and covers the Class BF (Bomber-Fighter) and BT (Bomber-Torpedo) in full and the first part of Class F (Fighter). The aircraft described are BFB, BFC, BF2C, BTC, BT2C, BTD Destroyer, BT2D Skyraider, BTK, BTM Mauler, FA, F2A Buffalo, F3A Corsair, FB and F2B.