The Spitfire was designed as a short-range interceptor which first flew on 5 March 1936 and was soon ordered in large quantities.The first production Spitfire came off the assembly line in mid-1938 and by the outbreak of war over 300 have been delivered to the RAF and ten squadrons already operational. During the Phoney War, the Spitfire was not deployed on the Continent and remained based on its British stations to defend the country while other squadrons were converted. It is in this role the Spitfire claimed its first victories over the Luftwaffe. When the military situation obliged the British to evacuate the continental Europe via Dunkirk, the Spitfire squadrons were called to cover the withdrawal, a period during which the type performed.
This chapter covers the operational usage of the Auxiliary squadrons (603, 603, 609, 610, 611 and 616) between 1 September 1939 and 30 June 1940. Over 40 photographs and 8 colour plates illustrate the book. 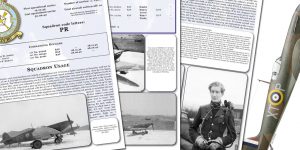