The Spitfire Mk.IX is one of the best known versions of the Spitfire. However, it should never really have existed. Its creation can be attributed to the appearance of the Focke-Wulf Fw190 over western Europe at the end of 1941. Royal Air Force pilots were quick to state the Spitfire Mk.V, the frontline RAF fighter at the time in Great Britain, was outclassed in many aspects by the new German fighter. The RAF, therefore, had to urgently find a solution to improve the Spitfire and with a new Merlin engine, the Spitfire Mk IX was born. The Mk.IX was produced for almost three years and would become one of the main fighters and fighter-bombers of the RAF in Europe in 1944 and 1945. In total, during the Second World War more than 100 fighter units were totally or partially equipped with the Spitfire, included the two Belgian fighter squadrons of the RAF, Nos. 349 and 350 and the only Dutch fighter squadron, No. 322. These three squadrons are here covered in 36 pages, close to 40 photos and five colour profiles. 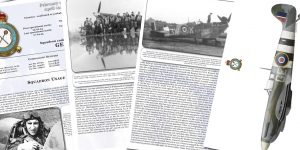 Kindle format is no longer offered and Epub can be purchased with Amazon since its new policy.