Belonging to the ‘third generation’ of Spitfires, alongside the F.21 and the F.24, the Spitfire F.22 was developed almost in parallel to the F.21 and was identical to the 21 in all respects besides the cut-down rear fuselage (see SQUADRONS! No. 7 – The Spitfire F.21). Arriving too late to see any action during the war, the F.22 became eventually the backbone of the Auxiliary Air Force re-formed just after the war while the Spitfire F.24, the last mark of the Spitfire played however its role in this unstable post-war era even if it hasn’t been engaged in combat. Its presence in the British colony of Hong Kong, while the Communits China had been proclaimed, was far to be only symbolic. Illustrated with over 50 photos and 13 colour profiles. 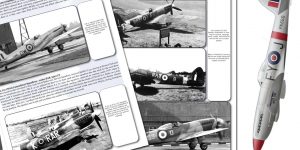