The Hawker Typhoon was designed to Air Ministry specification F.18/37 which sought to take advantage of the new generation of 2000hp engines and satisfy the latest requirements in armament. This major step up demanded a larger and more advanced airframe than that of the company’s then current Hurricane and by March 1938 work had commenced on the first two prototypes; one with the Napier Sabre, soon called ‘Typhoon’ and the other with a Rolls-Royce Vulture, later to be named the ‘Tornado’; this latter machine was the first to fly, on 6 October 1939. The Vulture did not give too many problems in the Hawker fighter but by the end of 1940 it was experiencing serious trouble with its installation in the Avro Manchester bomber, and as a result the project was abandoned. With the third engine (Bristol Centaurus) of the new generation still some way off, the Air Ministry had little option but to concentrate on the Typhoon, which had made its first flight on 24 February 1940. The new aircraft encountered teething problems and was also delayed by production priorities for other Hawker types during the Battle of Britain. During its early operational life the Typhoon had to overcome problems that threatened to end its service, but these were eventually remedied so that, by the last quarter of 1943, the Typhoon had become a reliable aircraft. Improvements included the introduction of the new single piece ‘blown’ hood, a four-bladed propeller and an enlarged tailplane, but there was no change in designation. When production ceased in November 1945, 3317 Typhoons had been built.At first pure fighters were produced, but, by the spring of 1943, only the fighter-bomber version was coming off the production line and by the end of the year all the Typhoon squadrons were undertaking some form of ground attack role. On the eve of D-Day the Typhoon had become the backbone of the 2TAF fighter-bomber force with no less than eighteen squadrons active. This book narrates the operational usage of two squadrons, Nos. 245 and 266, which had both connections with Rhodesia. Illustrated with 39 photos and 10 colour plates.

(plus a plate on the Typhoon identfication markings) 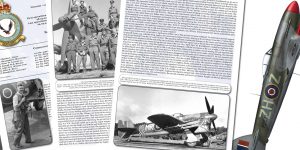