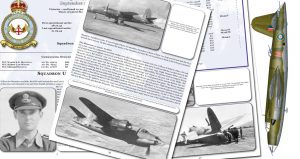 Even though the history of the Marauder is generally pretty well known, the history of the Marauder Mk.I has been overshadowed for many reasons, the main one being that only 71 Marauders received the designation of Marauder Mk.I. With so few aircraft only one unit could be equipped with this type and this was No. 14 Squadron in the Middle East. Manned by aggressive aircrew, coming from all the Dominions, the Marauder Mk.I was used for two years in the unexpected role of maritime reconnaissance. Sorties were normally flown by a single aircraft and the Marauder Mk.I recorded an impressive record against the Luftwaffe, showing that the aircraft was able to defend itself and was far from being an easy prey, but sustaining heavy losses with 25 aircraft lost on operations. It is a revised edition of Allied Wings #2 publised in 2008 with new photographs and new data added. Forry pages, over thirty photos and 5 colour profiles.