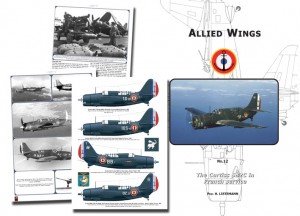 The Curtiss SB2C participated in the last two years of the war in the Pacific and was one of the major combat aircraft in the USN inventory in 1945. With the War’s end these aircraft were soon relegated to second line units, but against all expectations the Helldiver had not fought its last war. A few years later, wearing French Navy markings, the Helldiver was used in Indochina where the French had been involved in combat with the Vietnamese communists and nationalists since 1946. Delivered under MDAP agreement they arrived in the area in 1951 and the Helldiver proved once again that it was a very capable aircraft. They were used intensively over a three year period including the decisive battle of Dien Bien Phu, which heralded the end of French control of Indochina. This is an exciting and informative publication for anyone interested in the SB2C Helldiver. 28 pages, plus three page of colour artwork, over 50 photos.

A paperback copy is available  with ISBN: